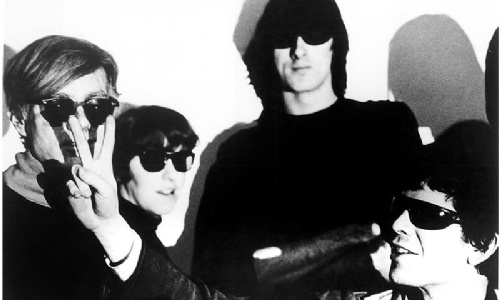 The start of it all. There are few underground music movements that cannot be traced back to 60s New York garage rock band The Velvet Underground, famous now as rock’s best kept secret but passed around for decades between these underground movements, a secret talisman. Their records resembled some kind of sacred text to the punks, shoegazers and indie kids it created; their origin story, although the petulant nature of youth culture meant any suggestion of influence or derivation was denied in favour of a year zero approach. The london punks of 1976 who bleated that England invented punk would never admit that their sound was what The Monks (5 american GIs in West Germany, 1964), New York Dolls (5 new yorkers in eccentric drag, 1973) and, of course, The Velvet Underground (4 college-educated Warhol darlings, 1967) had done a decade earlier, repackaged with safety pins, bleached hair and doc martens. Every non-conformist would shudder at the idea that their parents also did the same.

The Andy Warhol banana motif on the cover of their debut has grown iconic over the years, a symbol of the 60s although the album could not have been less in keeping with the mood of 1967; the idealistic hippies did not seek such a comedown. An unusual choice of chanteuse had been made by Warhol; a young german model by the name of Nico who had been dismissed as a talentless pretty face. She was a moping, hulking figure who possessed a haunted beauty in her distant eyes and haughty cheekbones, with her silent movie makeup and handbag clutched tight to her statuesque form she was the first goth girl, a fallen angel on the stage of a sinful, smoky venue. She gripped the microphone like a lifeline, her voice rang through it like a corrupted bell, its dissonant, atonal tremour jarred beautifully with the jangling organ, ostrich guitar and scratchy viola on the track All Tomorrow’s Parties to create a backwards funeral march, an ode to the trampled wallflower, NYC’s death knell. They also made disarmingly pretty music; music box lullabies to sing the abandoned urchin to restless sleep.

Lou Reed’s precise, leathery drawl and sexual ambiguity made for stark contrast against Nico’s tragic beauty and vague grasp of melody, however a certain aloofness brought them together as city-beaten chanteuse and chanteur telling the forgotten fables of the back streets. Rather than the transcendent LSD trips of the era their lyrics depicted the depths of heroin addiction and devious street dealers, rather than free love they sung of prostitution and masochism. The women pined for were not doe-eyed dolly birds but haunted femme fatales cast into the gutter by mankind. This potent cocktail of a tracklist led it to be banned in many record shops and largely ignored by critics, but it waited patiently in its peelable packaging to be picked up by the next outcast teenager and beckon them in until enough people were in on the secret to form a band, even a scene, from this energy. A young musician called David Jones in London received a pre-release test copy without a cover, the same David who would five years later dye his mod haircut to an orange mullet and swap his chelsea boots for blue platforms to sing an ode to Lou Reed on television under the name of Ziggy Stardust. Not bad for a critically panned debut.

Lou Reed’s lyrics feature a cast of recurring characters; the disillusioned young woman crying at the party, shady characters skulking the curb clad in black, the outcast transgender woman isolated in her own skin, the fame-ravaged film star behind her sunglasses. Easy motifs to spot throughout his work in their many forms, he observes, antagonises and empathises with them in a voice wry and poetic, a celestial being watching over the nightlife through his dark glasses. When Nico left to make her own terrifying albums, the Velvets continued on their muffled, scratchy path to musical importance. They were not your typical american garage rock group and it would be difficult for Lou Reed, accompanied by a Welsh viola player, conventional guitarist to hold together Reed’s experimentation and a baby-voiced female drummer to make anything resembling typical garage rock.

No one ever described the awe of their live shows better than the Modern Lovers’ Jonathan Richman; an artist who blended Lou Reed’s american sensibility with an earnest naivety and authentic uncoolness in the early 70s. In his song Velvet Underground, he described their sound as “a spooky tone on a fender bass, played more notes but left more space,” “as stark as black and white stripes,” “biker boys meet the college kind, ”bold and brash, sharp and rude”. This influence would creep like a shadow over all corners of alternative music but it would take decades for the rock establishment to index them.. “After Hours” ignited anti-folk, “Sister Ray” ignited noise rock and “I’ll Be Your Mirror” ignited twee-pop. Seeds planted in the grooves of the vinyl would be nurtured into entire genres, as the records moved from bargain crates to HMV they shied uncertainly into the retrospective spotlight.