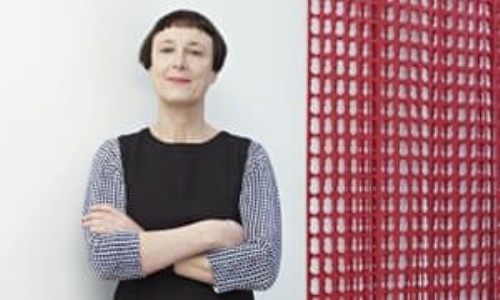 Cornelia Parker spoke to us about an eclectic range of sculptures and installations she created and what had inspired her to do so. With the use of a slideshow, Parker displayed several of these works which were produced on different platforms; from the roof of the museum of the Met in New York to the literal streets of Jerusalem.

One of Parker’s pieces which was made from 4500 red poppy cutouts, called The War Room was visually phenomenal, whilst enabling everyone to remember the civilians who had fought for the country in a very memorable way.  Parker’s artwork Embryo Firearms, containing a hidden weapon is very creative, where the weapon which is embedded in this piece can only be identified by x-ray vision. The students found the artwork Precipitated Gun which resembled a ‘line of cocaine’ but was actually the remnants of a gun that has been pulverised, very amusing as it is very abstract and ambiguous.

Parker’s work in the streets of Jerusalem is most inspiring as she produced a masterpiece on the cracks of the street where she made casts of the cracks between the pavement slabs, a process she described as an attempt to ‘record their contours, occupy their territory’.  For this piece Parker poured latex into the cracks of a pavement in East Jerusalem. Once the cast was set she lifted it out and brought it back to Britain where it was cast in bronze so the work now represents a piece of that occupied territory both symbolically and literally.

In addition, in her collaboration with the physicist Kostya Novoselov (awarded the Nobel Prize for the discovery of graphene - the world’s thinnest and strongest material) they

used graphene to create a masterpiece of fireworks from literally a human breath!

She most definitely inspired the Sixth form students to unleash their artistic skills, even those of us who don’t study art!